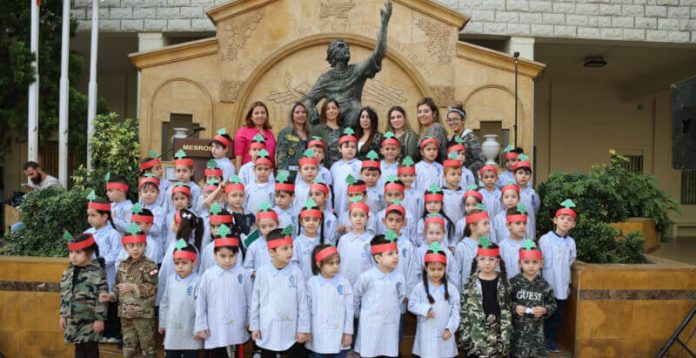 During the second two weeks of November, the students of the Armenian Catholic Mesrobian High School commemorated the Lebanese Independence Day with various activities, the central event of which took place on November 18th, within the main courtyard of the school.

After the opening speech of the Grade 12 student, Hrut Kurumlian, the students of KG1, the elementary and high school students as well as the Big and Small Swallows choirs, led by Mr. Manuel Keshishian, performed in the artistic part. Through group songs, recitations and messages, Mesrobian’s students honored the memory of the representatives of the Independence generation and stressed the importance of the idea of independence in the construction of a progressive state.

Mesrobian’s Principal, Mr. Gregoire Kaloust, noted in his message that Independence Day has been celebrated for almost two years in special circumstances, marked by acute social, economic and health concerns. He stressed that the Lebanese, and especially the youth, are committed to overcoming all known difficulties and to clinging to Lebanon in order to maintain the mission of the land of the cedars.