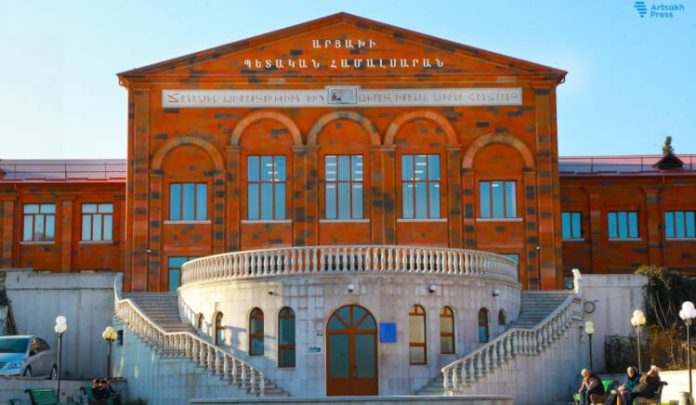 On Saturday, November 20, the Society for Armenian Studies (SAS) sponsored a talk via ZOOM by Prof. Armen Sargsyan, President of Artsakh State University (ArSU), on the past, present, and future of the university. The SAS and Artsakh State University recently signed a memorandum of understanding that deepens the links with the Republic of Artsakh.

Over the years, the Karabagh wars have taken their toll from the university student body. The 1990-1994 war cost the lives of 27 students, three more died during the four-day war of 2016, and 26 students were killed in 2020. Many students currently serve in the army both as regular and reserve soldiers.

While the university worked online during the pandemic, Sargsyan noted, it went back to traditional teaching in December and by January 2021, 96% of students and faculty (two faculty members died of Covid-19) were back. The university lost 380 students in September 2021 with relation to September 2020. The new wave of pandemic forced to resume online classes in early November with a participation of about 70% of students and faculty. Poor Internet connection and electricity services effect negatively on the operation.

Sargsyan noted that the current situation of the university is stable, but contingent to the situation in Artsakh and Armenia. He noted that the university received a four-year accreditation from Armenia on October 22, 2021, after this had been postponed twice due to the pandemic and the war. He said that the biggest challenge is the requirement to have foreign exchange of students and professors. ArSU tries to fill this gap as much as possible, although there are no relations with foreign universities, other than some links with Hungary, Slovenia, and Russia, and now with California State University at Fresno via SAS. In the absence of links, the university is trying to bring foreign experience to the local level.

Professor Sargsyan thanked the Diaspora for its support, with special mention to philanthropist Gerald Turpanjian, who sponsored the construction of the main building with capacity for 6,500 students, and Professor Barlow Der Mugrdechian, who donated a computer lab to the university. Among future needs and projects, he mentioned the opening of a language institute, the enlargement of the furniture collection, the development of knowledge sources, and the developing of the university library.

According to Prof. Bedross Der Matossian, the President of SAS, the Society is going to help ArSU in increasing its library collection of books.