Commemoration of the Saint Translators Day at Mesrobian High School 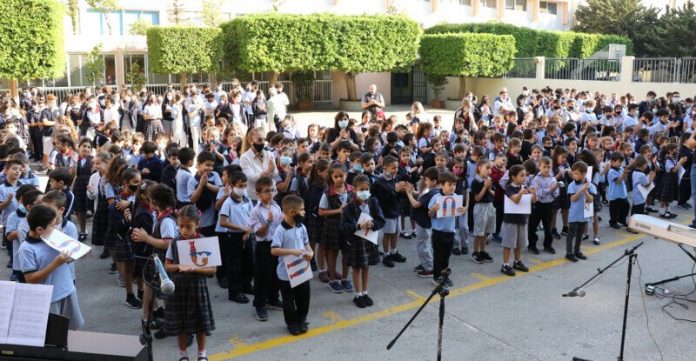 The Armenian language is the home of the Armenians.

On October 22nd 2021, the students of the Armenian Catholic Mesrobian High School celebrated the Saint Translators» Day during a ceremony held within the school’s main yard, after the forced break of the previous two years.

The opening speech of the event was delivered by Nanor Arnelian. «Over the centuries, when many powerful nations couldn’t withstand the storms that came across them and thus became history, the Armenian nation survived, and one of the main factors of this survival has been our faith which has been translated into Armenian by our translators as well as our culture.» said Mesrobian’s student. She added that, as we overcame the past and survived as a nation, we will continue to survive as long as we do not lack the strong will bestowed to us by our translators, clinging to our language, culture and faith.

In the artistic section, the students of KG3 sang two songs, «ABC» and «Who am I?», and recited a poem entitled «Mesrob Mashdots». The Grade 5 students went on by reciting «Armenian» (by Khachik Tashdents), then the Grade 6 students recited «The Armenian language is the home of the Armenians» (by Mushegh Ishkhan) after which 7 students from the intermediate level presented sayings about the Armenian language. The Little Swallows Choir performed the song «I Love My School Very Much», conducted by Mr. Manuel Keshishian. Nanor Arnelian and Serly Nemshherilian played «Kele Kele» to end this beautiful artistic section.

The main speaker, Rev. Fr. Raffi Hovhannesian who is the chaplain of the school, addressed the students about the sacrament of the day. The reverend father first gave an overview of the difficult and enormous work done by the Holy Translators in the fifth century, giving us the «Queen of Translations» of the Bible, as a French scholar called it. He stressed that the achievements of the Translators are significant not only for Armenians, but for all of humanity, because it is thanks to them that we have received many works in foreign languages, the originals of which have been lost over time. Father Raffi said that the Bible is the word of God for mankind, and therefore it should be a constant source of reading for Christians. He expressed his confidence that every student of Mesrobian can be an apostle of Christ and his Church and thus continue the work of the Holy Translators.

At the end of the ceremony, the Principal of Mesrobian High School, Mr. Gregoire Kaloust, delivered his message to the students. He said that the statue of St. Mesrob standing within the main court of the school is a presence that inspires Armenian spirit, soul and mindset to the students, who came today to confirm once again that they remain firmly attached to their Armenian identity. Mr. Kaloust continued by saying «Come! Let us pledge that we will forever remain faithful to the tradition of St. Mesrob, and that we will always speak, sing, pray and live as Armenians, always keeping the Armenian name high everywhere.» Stressing that the Armenian language should become a home for everyone, he concluded, «Let’s protect that home, and you will see that we will be able to return the occupied territories of Artsakh and other territories of the homeland which were forcibly taken away from us.»

On the eve of the Saint Translators» Day, the students of the Mesrobian Kindergarten and the elementary sections performed various activities related to this theme last week.