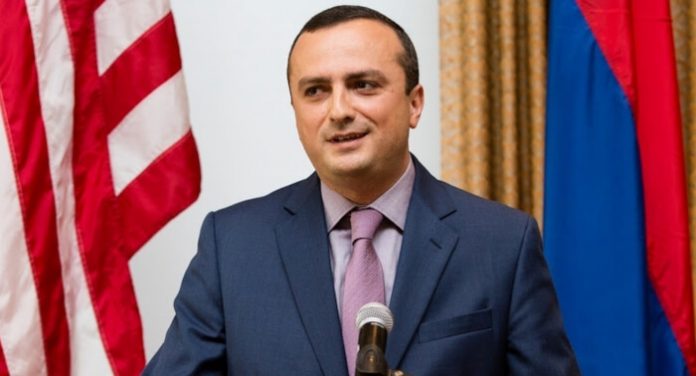 As the point of contact between Stepanakert and Washington, D.C., Avetisyan helps maintain strong ties with Armenian Americans and serves as the conduit between the American diasporan community and Artsakh Armenians. He also expressed his appreciation to the Assembly for its important work over the decades.

Regarding developments in Artsakh, Avetisyan said the Republic of Artsakh has launched a «comprehensive restoration» in the political, economic and humanitarian spheres since the September 2020 war when Azerbaijan, with the full and open support of Turkey and international terrorists, once again attacked Artsakh on an «unprecedented» level, including by way of the «scale and scope of the weaponry and offensive power used against Artsakh, Turkey being at the forefront and in control of ground and air forces,» and the participation of Syrian mercenaries.

Avetisyan remarked that he expects negotiations to resume and to «finalize a general vision of settlement because the conflict is not solved.»

«The Karabakh-Azerbaijan conflict is not resolved since the core issue of the conflict – the sovereign status of Artsakh – has not been internationally solidified,» said Avetisyan. «We expect that the OSCE Minsk Group will resume active efforts to improve the situation on the ground and come up with a corresponding formula which would establish long-term stability for Artsakh and the entire region.»

Avetisyan also said that the government is focused on «restoring lives and infrastructure» and efforts are being made to provide everyone affected with basic needs, such as housing.

«The government is doing everything possible to build homes to make sure people who have been forced out of their homes stay in Artsakh and connect their future with the Republic of Artsakh.»

The most pressing humanitarian issue is the unlawful detainment of Armenian prisoners of war held by Azerbaijan, according to Avetisyan, who noted that Baku has acted in «complete disregard of humanitarian and international law,» though he remains hopeful that the «international community will continue paying serious attention to this problem until all our compatriots return to their families.» Avetisyan also stressed the importance of urgent international actions for preservation of the Armenian Christian heritage from destruction in the territories under Azeri occupation.

During the question and answer session, Avetisyan emphasized that the Artsakh issue is part of the «pan-Armenian agenda» and welcomed open lines of communication as well as interest from the diaspora, particularly the younger generation, to get involved and reach out.

Avetisyan also touched upon the security currently maintained by Russian peacekeepers due to the «fragile situation» and continued aggression by Azerbaijan to cause instability in the region. He noted that more people are visiting Artsakh, which is a positive way to show support.

«The more people who come to Artsakh, the more our adversaries will see that Artsakh continues to remain in the hearts and minds of our compatriots around the globe, while also supporting the post-war economy,» said Avetisyan. «There is always hope but we have to reinforce hope with action.»

«In Artsakh we suffered a lot, but we survived as a state and government, though at a very high price,» said Avetisyan. «We are doing what we can to eradicate the consequences of this aggression and come out as a strong state and society.»

The Terjenian-Thomas Assembly Internship Program, which is taking place virtually this summer, provides college students of Armenian descent an opportunity to gain exposure to the policymaking process in our nation’s capital for eight weeks each summer.

Since 1977, the Armenian Assembly of America has assisted over 1,200 participants in securing placements in prominent congressional offices, government agencies, media outlets, think tanks, and non-governmental organizations in Washington, D.C.

Established in 1972, the Armenian Assembly of America is the largest Washington-based nationwide organization promoting public understanding and awareness of Armenian issues. The Assembly is a non-partisan, 501(c)(3) tax-exempt membership organization.