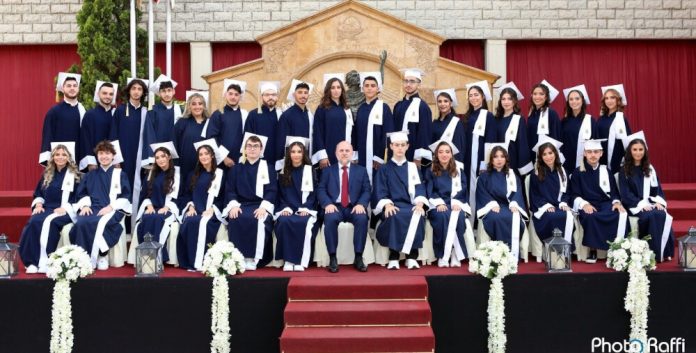 In the past three years, Lebanon and the Lebanese Armenians were subjected to extremely difficult life conditions which remain to this day, manifested in social outbursts, financial crisis, ongoing inflation, unemployment, the corona pandemic, the Beirut port explosion as well as the Artsakh tragedy. All these affected deeply Mesrobian College as well on the organizational, material and psychological levels, causing many shocks to our students, parents and teachers.

With this background, the graduation ceremonies of the Armenian Catholic Mesrobian High School and Technical College came as a resonating answer to the worries that plagued us and are still enduring, affirming that these schools, as members of the Lebanese Armenian educational family, are not only standing firm in the path of their educational mission, but are also continuing to keep their vision fixed on the heights of development and progress, full of determination to achieve them.

The graduation ceremonies of Mesrobian Technical College and Mesrobian High School respectively took place on July 1 and July 8 2022 in the main courtyard of the college, in the presence of the Armenian Catholic Church clergy, representatives of various organizations as well as the parents and teachers, and were presided over by the Deputy Chairman of the Administrative Council of the Armenian Catholic Patriarchate Schools, Monsignor Gabriel Mouradian.

It was indeed a pleasant coincidence that the graduation of the 40 students of the Technical College occurred on the 40th anniversary of its foundation, whilst the High School, founded 83 years ago, handed over its 29 graduates. The harvest of the Technical College graduates of this year was named after the longtime teacher of the school, the late Mr. Antoine Abou Nohra.

In both of the ceremonies, the students presented well-ordered artistic performances with songs, music and recitation, while their representatives expressed words of gratitude and thanks to their parents, teachers and to the administration of the college for the of care and education they received from them.

The Principal of Mesrobian, Mr. Gregoire Kaloust, addressed the students, emphasizing the importance of hard work, loyalty, faith and love as the most reliable ways to ensure a successful future education and life in general. He thanked the Armenian Catholic Patriarchate and the spiritual fathers of the church for their unconditional and broad support, the teaching staff who performed their duty with excellence, the parents who endured all the sacrifices as well as the benefactors and friends who supported the college.

«We successfully completed another year, under unusual conditions, with extraordinary means. While facing existential challenges, we managed to maintain the course of progress, always faithful to our promise. In addition to our current achievements, we also recorded historical achievements. Thus, in 2022, Mesrobian High School received the Label-FrancEducation international accreditation from the French authorities, which is considered a quality seal of approval in the field of French language education on a global level,» said Mr. Kaloust. «Today, I am coming to confirm once again that Mesrobian will take steady steps in accordance with the standards and requirements of modern education. This school is not just surviving, but it is also efficiently preparing our generations for a better future, with a strong Christian spirit, a vibrant national consciousness, a healthy civic and human profile, and competitive knowledge,» he added.

At the end of the two ceremonies, sixty-nine students from Mesrobian High School and Technical College received their graduation certificate and made the transition to a higher educational stage, promising to always uphold the reputation of their school anywhere they might be.