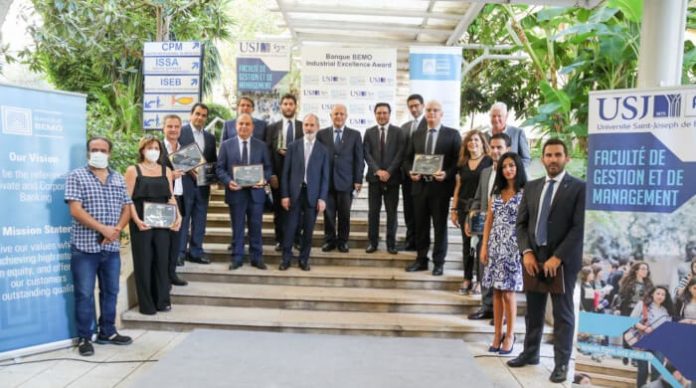 Faced with pressing crises and challenges these past two years, the Lebanese industry is the driver of the Lebanese Economy. Believing in the power of all Lebanese sectors and especially the industrial one, Banque BEMO hosted the ceremony of the “Industrial Excellence Award 2021” on July 28, 2021 at Saint Joseph University, Campus des Sciences Sociales, Huvelin Street, after it was launched last year to instill the necessity of excellence and exceptionalism.

In partnership with the Faculty of Business Administration and Management (FGM) at Saint Joseph University (USJ), the “Industrial Excellence Award 2021”’ jury members shortlisted 10 companies based on exceptionalism, quality, social responsibility, governance, crisis management, operational performance and sustainability. NAGGIAR TRADING was announced the Winner, GENERAL PAINT CO. the first runner up, and CONFEXIA the second runner up.

During the event, Dr. Riad Obegi, Chairman and General Manager of Banque BEMO said, “Lately in Lebanon, we have reached the highest point of mediocrity. I regret to say it. But we can no longer afford mediocrity. Instead let’s try to strive for excellence because we have already tried mediocrity and it has proven to be bad. Together let us bet on excellence in each of our actions, in each of our sectors and not just the industrial sector. We – at Banque BEMO – intend to launch many more excellence awards, such as the University Excellence Award.

Above all, we need to go beyond the standard level and make Lebanon an excellent country. This is a unique opportunity because we have no choice. Our only choice today is Excellence.»

From his end, Prof. Salim Daccache s.j. Rector of Saint-Joseph University, said, “The mission of governance and specifically academic governance is to prepare leaders and human resources by offering a diploma for distinguished students who succeed in their work. This diploma acts like a passport, but not to travel and work abroad, but to work here in Lebanon, because the university’s mission is to instill the youth in this country which is distinguished by its beauty, nature, and humanity above all else.

Together we can accomplish this in order to raise Lebanon’s name high.”

The Dean of the Faculty of Business Administration and Management at USJ, Dr. Fouad Zmokhol said, “We must resist intellectually at university campuses for the sake of our youth. The most important thing that remains in Lebanon and that will help us rebuild the country is youth and education. Through education we can export our knowledge to the world as we did the alphabet.

There is an exceptional sector capable of flourishing today, namely the industrial sector. It should be given a lot more attention at all levels.

Lebanon has long been a political and economic laboratory. But today Lebanon must be a laboratory for universities and companies where we try, innovate, create ideas, and create synergies between companies, universities, creators and industries so that this synergy really creates growth and value.

To be able to survive and not only in Lebanon but in a post-pandemic world, Excellence is our main driver.”

In addition, the Secretary General of the Association of Lebanese Industrialists Mr. Hassan Yassin, represented the President Dr. Fady Gemayel. He said, “Our gathering today is a meeting of hope held in the most dangerous crisis the country is going through. In these circumstances, it is a message of commitment and faith in Lebanon and its capabilities. The industrialist is a shadow hero for the Lebanese economy. The Lebanese industrialists are the hope of our youth.

We appreciate the initiative of Banque BEMO and its Chairman, Dr. Riad Obegi, who valued the industry today by believing in its role in activating the entire Lebanese economy.”

As for the Country Head of the International Finance Corporation, World Bank Group, Mr. Saad Sabrah, he said, “This initiative shows the level of resilience the Lebanese and the private sector in Lebanon have always managed to demonstrate.

The international community is ready and has established a framework for the recovery and reconstruction, with an emphasis on the role of the private sector. The new Lebanon is not far away and I can assure you